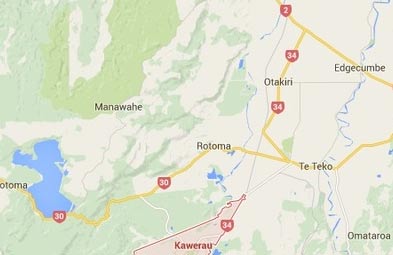 The Manawahe is clearly identifiable not just by arbitrary lines on a map but by conspicuous geographical features; rugged hills that rise suddenly from the Rangitaiki plains and bound by the Pacific Ocean and Rotoma.  Perhaps this factor lends itself to the Manawahe identity that has , despite its small size, created such a social and supportive community. So what draws people to the Manawahe? For some it is the rugged hills and the stunning views (for the resident Dutchies it’s the hills full stop) for others  the rural life style and recreational opportunities close at hand. For myself (Fran) there is something magical about staring out from remnant native bush and hearing the haunting song of the Kokako – almost as it might have been in pre-European times. Meanwhile you are watching over the towns on the plain busily tending to their tasks. Putuaki and nearby Motohora’s  solid presence  suggests they will be looking on long after our menial to-ing and fro-ing has ceased. In contrast White Island puffs  in the distance reminding us to appreciate the here and now lest it be gone tomorrow.  But this is from a townie’s perspective! Here is some more matter of fact info about the Manawahe and its people.

The land of Manawahe was formed by a variety of influencing forces. It was shaped by the volcanic activity of Taupo, Kaharoa and Tarawera giving rise to the predominantly pumice soils in the hills. While this provides fertile free-draining soils, it has been the downfall of the Karaponga hydrodam built in 1928 as the highly mobile pumice soils infill the dam continuously. Volcanic activity is also responsible for the formation of Rotoma. In some areas marine sands and fossils can be found- momentos from a time when those soils lay at sea level, before the process of uplift and subsidence raised them into hills.  Tarawera River and smaller rivers are responsible for contributing silts to the rich peat soil in the lower reaches of the corridor. Yet another shaping factor is the fault lines that run through the Manawahe hills, the activity of which can be seen as recently as the 1987 earthquake.
This steep to rolling hill country is predominantly used for sheep and beef farming and forestry.  There are a few dairy farms on the flatter country. Hunting for pig, deer, possum and rabbits is encouraged by many farmers to control pest populations. Rotoma is a popular spot in summer for swimming, boating, kayaking and other water sport.